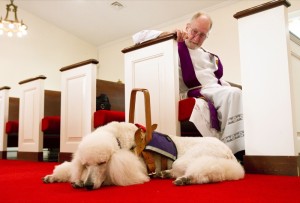 NEWPORT NEWS, Va. (AP) — The Rev. Joel Marable stood at the altar at St. Matthew’s Anglican Catholic Church on Christmas morning and officiated at Mass, just as he has done many times before. But this time was different.

This time his friend Donovan sat nearby, meticulously monitoring the priest’s blood pressure. Marable, the 67-year-old curate at the Newport News church, has survived a dozen strokes, and if Donovan detects any significant drop in blood pressure, he signals for the priest to sit down before he loses his balance and falls. 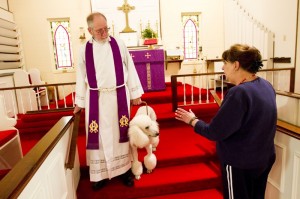 Trainer Pat Gentry, right, works with Marable and Donovan at the church

Donovan is a 5-year-old, 55-pound standard poodle. He is a service dog, trained in Hampton through the Jasmine Charitable Trust. Using the same keen sense of smell that allows police K-9 units to track suspects and missing people, Donovan reacts to any scent that suggests a change in Marable’s body chemistry.

Beverlee Engle, director of the Jasmine Charitable Trust, has grown accustomed to the skeptical looks she gets when she first explains how dogs can be trained in this way. But she says she has seen it work too many times — a trained dog signaling an unhealthy blood pressure in an unsuspecting stranger, only to have that person get tested and learn that the dog’s diagnosis was correct.

“Even the most minute changes in the body change its scent,” explains Engle, who has a doctorate in human services. “If a person breaks out in a sweat, the salt changes the scent immediately. If a person is about to have a seizure, a trained dog can notice it before it happens.” Marable admits there are still times when he thinks Donovan is picking up a false scent. Donovan will give the signal — standing up and taking a position directly in front of him — and Marable will assure him, “Donovan, I’m fine.”

Engle, sitting nearby, smiles and gently chides him: “Father Joel, you need to trust the dog.”
The bond between Marable and Donovan has grown strong. The dog can follow more than five dozen commands. Like a seeing-eye dog, Donovan focuses solely on his human unless he is given the cue to take a break, at which point he becomes sociable and can accept greetings from others.

During Christmas services, Donovan laid down in a designated spot near Marable. Members of the congregation, who have become acquainted with the dog during Marable’s training, were instructed how to approach the priest so that Donovan would not be distracted during the rite of Communion.

Engle refers to him as a “mobility-stability dog,” and she believes Marable is the first clergyman in the country to use such a service animal while officiating at services. Before he started working with Donovan, Marable had to use a cane to get around. “I lost three canes,” he says. “There was always someone coming after me saying, ‘You forgot your cane.’ ”
Now he holds onto Donovan.

“The difference is amazing if you watch him closely,” Engle says. “When you see him walking by himself, he looks like a man who had a stroke. When you see him walking with Donovan, he just looks like a man walking his dog.” Marable says he grew up with dogs and has always loved them. His 10-year-old lab, Noah, developed a quick bond with Donovan as the two dogs came to understand the different roles they play in Marable’s life.

After a year of training, Marable says he is amazed at how much Donovan is able to detect and communicate. Like Engle, he says he has gotten used to dealing with skeptics. “There are people who still get concerned when they know I’m alone at the church,” he says. “They know that I’ve had strokes, and they worry that something will happen to me. “I tell them, ‘I’m not alone — I’ve got Donovan.’ They tell me that he can’t dial 911. “And I tell them, ‘Not yet.’”

Please register to get full access to the site, and receive our newsletter.